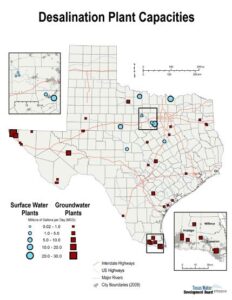 Desalination is a process that removes minerals from saline water.

How does the desalination process work?

The two most common desalination methods are thermal and membrane technologies. The thermal process involves heating saline water and then condensing and collecting the water vapor to produce fresh water.  Membrane processes, commonly referred to as reverse osmosis (RO), rely on semi-permeable membranes to separate minerals from water.

Are there any desalination plants currently in operation in Texas?

All desalination facilities in Texas currently use brackish ground water. There are no marine (seawater) plants in operation in Texas as of March 2016, although several are planned.

How much does water desalination cost?

Are there desalination plants in other countries? 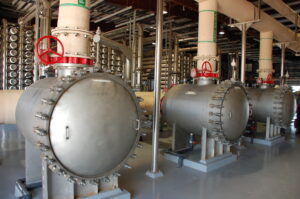 About one percent of the world’s population currently receives their drinking water from desalination. There are approximately 12,500 desalination facilities in 120 different countries capable of producing 4 billion gallons per day. Sixty percent of these facilities are located in the Middle East where desalinated water accounts for about 70 percent of the region’s water supply.

Spain recently announced plans to build 21 seawater desalination plants along the Mediterranean coast. Once completed, these plants will have a combined capacity of 527,000 acre-feet per year.

What happens to the salt and minerals that are removed from saline water during the desalination process?

If you have a question about desalination in Texas, please use the contact us form on this website.

Membership in TexasDesal puts you on the front row for water policy initiatives, actions with elected officials and government agencies, and the latest desal industry developments in Texas.